I recently bought a 99 Mustang GT, and the trunk wouldn’t stay open. Fortunately, like most cars, it’s a cheap and easy fix. 94-04 Mustang trunk lift support replacement simply involves two new trunk supports, a flathead screwdriver, and a few minutes of your time. 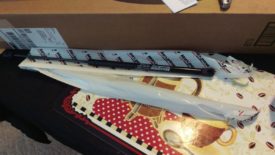 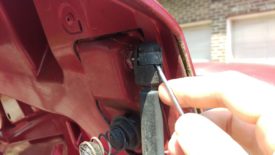 Pry off this C-clip with a screwdriver 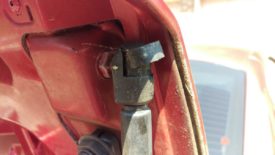 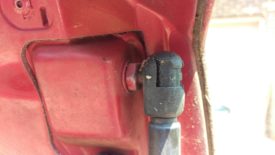 To remove each strut, this top c-clip must be removed. There is a divot in which a flathead screwdriver or similar prying tool can be inserted. It simply pops off as shown. 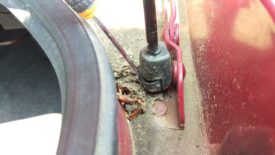 C-Clip at the bottom

There is also a C-Clip at the bottom. It is removed in the same manner. 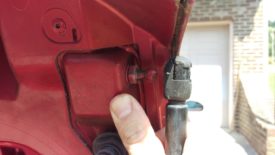 Without the clip, the strut pops off of the trunk

The strut will simply pull off of the top and bottom with the c-clip removed. Be sure to support the trunk when you remove the strut, as it will slam closed without a the struts supporting it. (Even if you replace one side at a time, a single strut may not hold the trunk up.) 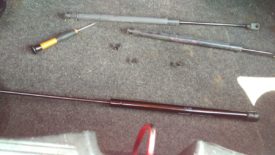 Here is a shot of both of the old struts alongside the new one, shown at the bottom. It’s not clear if the old ones were the originals from 1999, but these support struts wear out over time on any car. 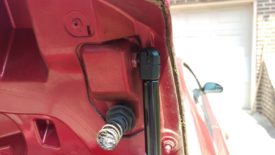 The installation procedure is the reverse of removal. With both c-clips off of the strut, slip it back into place on the trunk. I made sure to keep the orientation of the main body of the strut towards the top, with the sliding shaft at the bottom, as the previous struts had been, although it probably doesn’t matter. Once the struts are on, push the c-clips in place. 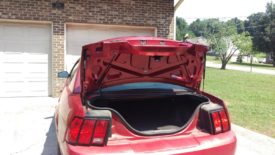 The trunk now stays open by itself

A trunk that won’t stay open by itself is pretty aggravating. Fortunately, there’s a simple solution. This procedure is the same on almost any car that uses these hydraulic struts for trunk opening.