This tandem axle trailer is used to tow my car to track days. Trailer maintenance is something people rarely talk about, but it’s really important. Regularly repacking your wheel bearings with grease will help extend the life of your axles and keep your gas mileage up while towing. Likewise, properly storing a trailer like this will help maximize tire life.

You typically look at the life expectancy of car tires in terms of how many miles you can drive before the tread wears down. On a trailer, however, most people don’t accrue nearly enough miles to wear down the tread this way. Instead, they usually rot out first. So one of the key points of this article is to protect your wheels from moisture and sun damage.

I’ll also make a couple of general notes about trailer tires here. One thing is inflation. Your car tires have a set PSI, probably between 25 and 35, where they’ll operate best, and it’s almost always below the maximum for the tire. Trailer tires, on the other hand, should always be inflated to whatever the maximum pressure is on the sidewall. For my tires, that’s about 50psi. Proper trailer tire inflation ensures they’ll hold their rated load and helps keep them from overheating at highway speeds.

Secondly, most people don’t actually get trailer tires balanced. The thought is that you balance a car tire because you’re going to rack up miles on it, but as pointed out above, you’ll probably have rotten tires before they wear down. I had one set balanced to see if it improved the noise and vibration from the unloaded trailer, but it really didn’t. It was also pointed out that you can’t get an alignment on a trailer either.

Long story short, I’ve quit trying to balance trailer tires. Essentially they’ll either be fine or so far out of balance that you need a new tire anyway. (As in, the tire was simply bad from the factory.)

Trailer tires come in two varieties: radial and bias ply. I’ve noticed that the majority of new trailers come with bias ply tires on them. Bias ply tires are cheaper, although marginally so these days, and have stiffer sidewalls.

However, I strongly prefer radial. Radial trailer tires have a higher speed rating and run cooler at speed. If you frequently drive on the highway, this is worth paying for. They are also less prone to developing flat spots from storage. Additionally, even though there was historically a large price difference between the two types, these days it is minimal.

With all of the rambling about trailer tires out of the way, let’s talk about storing them. The ideal situation to keep the tires from rotting is to get them off the ground and out of the sun. I choose to do this by storing my trailer on blocks, with cheap covers on the tires. All this requires is a few cinderblocks, a bit of scrap wood, and a cheap bottle jack. 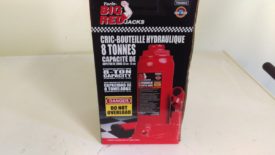 Bottle jack from tractor supply that lifts up to 18″

I bought this bottle jack

from Tractor Supply for about $25, give or take. The key thing I was looking for was a decent lifting height, as a lot of the jacks commonly available only reach about 15″ or so. Note that a floor jack works as well and is probably even better since it is more stable. However, I put my trailer in my side yard, and getting a floor jack out there is a big pain. 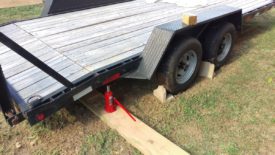 Jacking up the trailer

With the nose of the trailer held by the trailer jack as normal, I use the bottle jack to lift on the frame just behind the tires on one side. Note that since this is on dirt, I put the bottle jack on a piece of wood to give it something substantial to sit on so it doesn’t sink. The trailer only has to be lifted high enough to get the tires off the ground and put something under the frame. If done correctly, the tires on the other side should still rest on the ground. 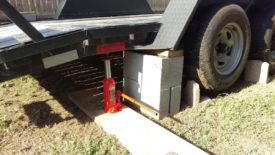 Once it’s high enough, I put two cinderblocks in place, plus a piece of wood on top. The wood primarily protects the paint on the trailer’s frame from damage. Note that you MUST have the holes up with the cinderblocks; this is the only way they have any strength. 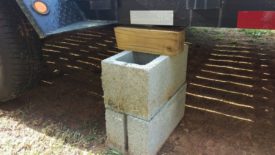 Same in front of the tires

I also do the same thing in front of the tires. If you jack up the rear with the bottle jack and have the nose high enough with the trailer jack, you should be able to just add these blocks at the same time. 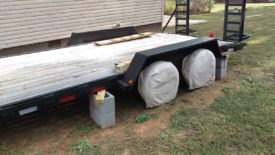 Once the blocks are in place on one side, lower the bottle jack. One side of the trailer should rest squarely on the blocks. If there’s a gap above the front cinderblocks, you can lower the trailer’s jack a bit. Rinse and repeat this procedure for the other side.

Once the entire trailer is resting on blocks, one set at each corner, you should also cover the tires. Trailer tire covers

are available everywhere, including Amazon. I bought this set at Harbor Freight for about $7, and you can’t beat the price. However, they do tend to fall off pretty easily, so next time I may look at two-wheel covers

, because I think they may stay put better.

Getting the trailer in the air with the tires covered like this will keep them from sitting in the dirt and getting damaged. I generally store my trailer this way over the winter to minimize damage from the elements. Over the summer, if I know I’ll be using the trailer fairly frequently, I’ll often just park the trailer on pieces of 2×12 under each tire instead. This at least keeps the bottom of the tires out of moisture without going through all this work.