Why a K24 Miata swap? My 97 Miata sees a fair bit of track time. The car has racing seats, Xida coilovers, a roll-bar, stickier tires, and so on. It’s really competent in the corners but is a typical Miata in the straights.

During open track time at my last track day at Barber, a novice-driven Subaru BRZ came up on me fast in a straight. I let him pass and proceeded to almost fall asleep staying on his tail through the final turns. However, as soon as we got to the front straight, he was off. This was not a particularly powerful car, and it left my stock-engine Miata in the dust on a straight. So I decided that screw it, I was going to buy some more horsepower. I settled on a K24 Miata swap, specifically a K24A2.

I went “full easy” route and purchased the full KMiata (now KPower) ultimate swap kit. My motor is out of a 2008 Acura TSX. I also went ahead and put in a 6-speed and a 4.1 torsen.

The guide itself is split up into steps.

Why did I go with a K-swap? Many people say “hurkaderrrr, I could have put a V8 in it for that!” Talented fabricators who can scrounge for cheap parts may be able to do a sub-$10k build, but that’s going to be much, much more work than this K-swap was. A comparable build ordering brand new kit parts off the shelf will easily be $20k+ once it’s all said and done, while a k24a2 swap is about $8k to $10k, and a k24z3 swap is about $2000 less than that.

Anyway, here’s how I see the swaps break down for a Miata. My flame suit is on, as I’m sure many folks will take arguments with the finer points of this list:

My general opinion is that v8 swaps are awesome but expensive and difficult to get enough tire under the car. Turbos are excellent for street cars, but I didn’t want to deal with heat management on track, even though Trackspeed Engineering now has a recipe for doing this. Also, as soon as a built engine is required to go with the turbo, it is easily as expensive as a K swap. Rotrexes are the easiest to install of this whole list, but their power curve leaves something to be desired. K24Z3s make sense for a track car that must retain the subframe for classing reasons, but I’d rather spend the extra money for the aftermarket support on a K24A2 otherwise. EcotecMiata claims 200whp, but they have many customers who fell far short of that power level.

So, for me, K24A2 it was. I’m extremely happy with the car as it sits right now, and I’m looking forward to putting new heads, cams, and higher-compression pistons in for even more power. 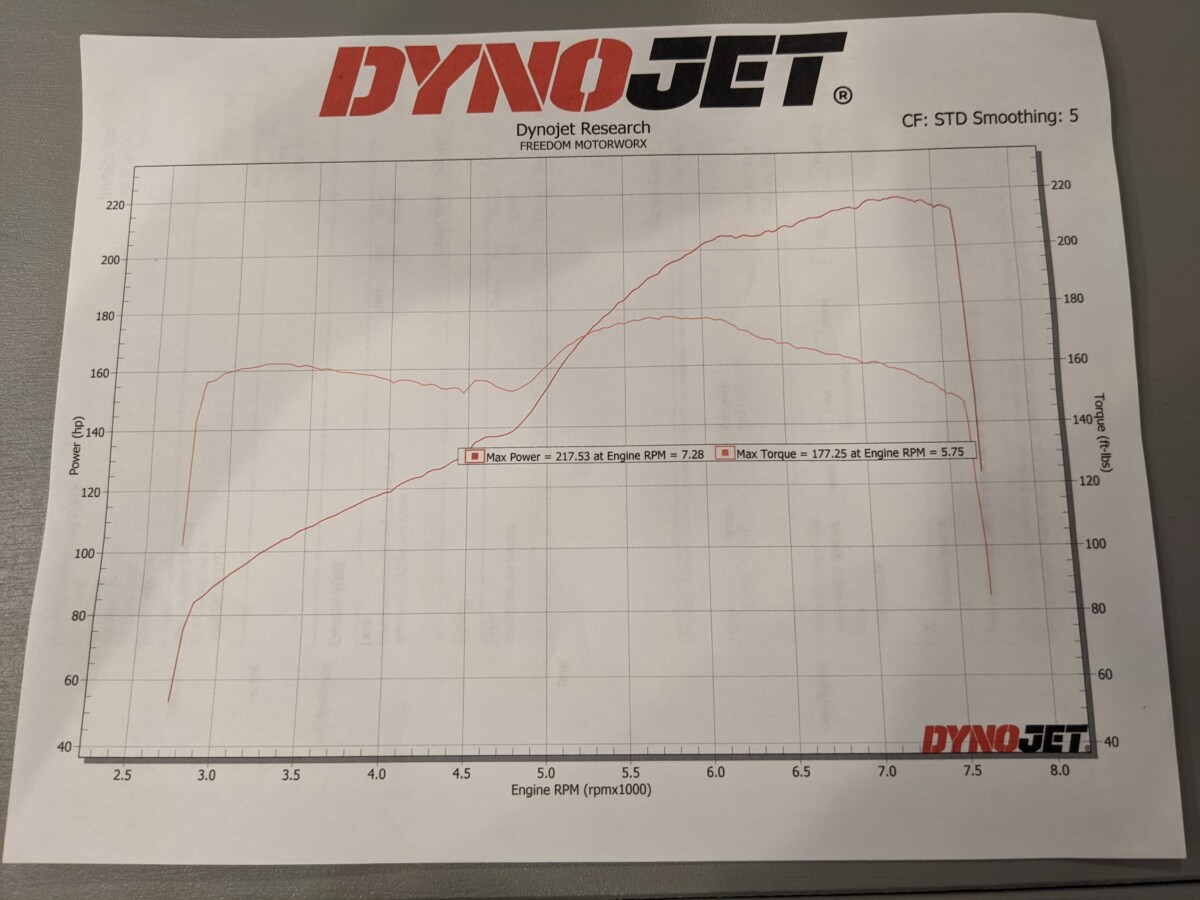 Here’s the dyno off of my swapped car. There is still some room for further tuning, particularly with the torque dip and onset of VTEC, but it illustrates the potential of the car. Power is everywhere, it revs to the moon, and it’s very smooth and easy to drive.

Fantastic project. I drive a stock 2005 S2000 but is looking for a Miata as a 2nd toy and Kswapping it. Looks like a fun project.
BTW, where are you located? If you’re local to the Houston and surrounding area, I’d love to check out your ride.
Also, were you able to retain AC, powersteering etc?

I’m up in east Tennessee, so unfortunately quite a distance from you. There is a K Swap Miata facebook group where you may be able to find someone local.

I initially deleted power steering. I eventually went with the epowersteering electric rack, which so far I’ve really liked. I literally just put AC back in the car as well, although haven’t tried it yet.

Awesome Writeup! Thanks for all the info- a good read as im getting ready to do this swap. Any estimation on how many hours went into this? How long should I plan for it to take?

Somehow I missed these comments, my apologies! I have no idea, because I decided to start the project when we had our second child, and so it took me way longer than it should have.

I would imagine you can get it done in maybe 3 months of weekends or something? Depends how fast you work.

Good call on the K-swap. I went the built motor and Trackspeed kit route, and I’m having regrets. Despite Inconel studs and the Stage 8 locking hardware I’m still having issues with the turbo hardware loosening up. I don’t want to deal with that on an ongoing basis, so I’m faced with going back to N/A with 140whp, trying Rotrex, or K-swap. Unfortunately the money for the latter two is not there at the moment.

Ouch, sorry to hear that. I’ve heard of several folks getting that setup eventually sorted out, but it never sounded pleasant.

Hey James! Doing this build with my son on a 93 NA, and currently waiting (patiently) for the kpower kit to arrive. Have done a lot of other things while waiting. We’re in East TN, and would love to see your finished ride and pick your brain on some details. Planning to autoX it once done.

Absolutely! Are you a member of Knox area roadsters, the Facebook group?